Discover tips for the best baking soda cleaning EVER

We've all heard about the cleaning power of all purpose baking soda uses but do you really know what it can do?

A box of Arm & Hammer baking soda costs only about a dollar and it's been a staple in my refrigerator to deodorize the food smell. Baking soda is also a natural product that has so many uses around the house and everywhere else that it does a little bit of everything. 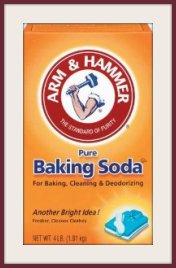 Baking soda is 100% sodium bicarbonate, which is a natural substance that maintains the pH balance neutralizing both acids and bases. It's great and it works because it actually eliminates odors.

Baking soda is also one of the primary ingredients in cooking, particularly when baking cookies, cakes and making pastries and bread because baking soda releases carbon dioxide when heated, and this causes the food to rise.

One of the great baking soda uses:it is a very effective as cleaning agent around the house. It's a perfect because it acts as a very mild abrasive cleaner for removing stains from sinks, counter tops and even fine china.

All purpose baking soda can effectively cause dirt and grease to dissolve in water, so it works as a perfect cleaning agent to clean just about anything around the house from kitchen counter tops, refrigerators, and stove tops. You can also sprinkle some on a sponge, baking soda forms a mildly abrasive scouring powder. Learn about benefits of bking soda and tips bor baking soda cleaning.