An Overview of Spanish Olive Oil

Olive cultivation began in the Middle East over 5,000 years ago and gradually spread westward throughout the Mediterranean basin. In Biblical times, it was used as a sanctifying chrism for kings, prophets and holy people from Samuel to Jesus.

This practice continues to this day in some churches when people are anointed with holy oil. For the Greeks, olives and olive oil are not only important foods but also symbols of holiness, courage and life. 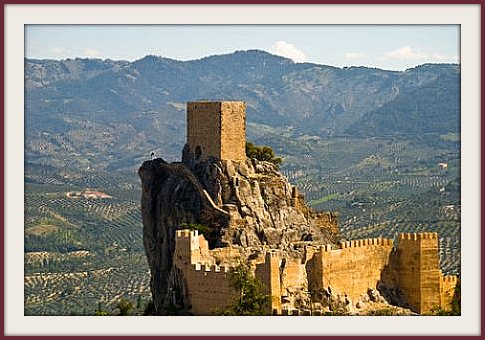 The castle of Cazorla surrounded by Olive tree field in Andalusia, Spain

You'd be surprised to know that it wasn't Italy but Spain that provided the bulk of the olive oil to the Roman Empire.

Archeologists in Rome found a mountain composed of 40,000,000 earthenware vessels that bore the labels of to the Spanish producers in Andalucía.

To this day Spain produces almost as much olive oil as the rest of the world combined. Today, two hundred sixty-two distinct varieties of olives are grown in Spain.

As in classical times, Spain continues to be the world's leading producer of olive oil, with approximately 975,000 tons produced per year. Over 250,000,000 olive trees grow in Spain covering 7,720 square miles of groves that stretch as far as the eye can see. Some of them are over one thousand years old!

Olive oil is coming into its own in America. I liken it to what happened forty years ago when wine became a regular part of American cuisine.

In the United States, we are now spending more on olive oil than any other vegetable oil! Quality is becoming more important as Americans find new and interesting ways to use olive oil.

Other more complex oils are made from several types of olives. The actual proportions that make specific oil unique are a closely guarded secret. For example, the extra virgin olive oils of Nuñez de Prado and Señorío de Vizcántar are made in neighboring towns and contain the same varieties of olives. It is up to you to determine which is more pleasing to your palate.

Two hundred sixty-two varieties of olives grow in Spain of which some of the better-known olives that are used in the selection of Spanish olive oils that are used by top producers like LaTienda are Arbequina, Cornicabra, Elpeltre, Hojiblanca, and Picudo.


Spain is one of the world's largest olive oil producers
and La Tienda provides wonderful extra-virgin olive oils
that are very low in acidity.

What Can I Learn from the Label of a Spanish Olive Oil Container?

"Extra Virgin" is the highest quality of all olive oils. It is always cold-pressed which means that the olives were harvested and processed naturally within 48 hours. That means no heat was used during the processing.

The acidity level is never higher than 0.75% (3/4 gram fatty acid per 100 grams of oil). This refers to the proportion of oleic acid, a monounsaturated fatty acid in the oil.

The lower the acidity, the finer the oil -- up to a point. The difference between .02% and .03%, for example, is indistinguishable, so the reason the percentage of acidity is listed is motivated purely by marketing.

"Pure" olive oil is refined from olives of high acidity, perhaps because they dropped from the tree and burst open on the ground, or stored too long before pressing. All the impurities are removed chemically-- along with its flavor. They then add some extra virgin oil to give it some taste. This cheaper oil is only suitable for frying.

"First cold pressing" on the label means that it is 100% extra virgin olive oil, not processed or pasteurized. 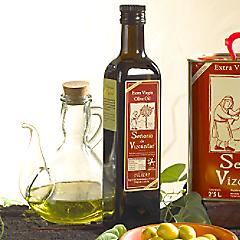 "Unfiltered" means that filtering of the olive oil is held to a minimum. Minute particles of olive will remain thereby enhancing the flavor of the oil. After a time they may settle to the bottom of the bottle. Of course, all olive oil is filtered to some extent to remove unwanted residue such as leaf fragments.

"Wild" olive oil is produced by trees, often hundreds of years old, which over the years have gone out of production. People are now returning to these historic groves to pick these organic, all natural olives.

"D.O." or "Denominación de Origin", followed by the name of a town or region, appears on the labels of some unique olive oils such as Señorío de Vizcántar, D.O. Priego de Córdoba or Unió, D.O. Siurana. This is an official government controlled designation to assure you that the product is authentic: the raw olives have to be grown within a specific geographical area; the distinctive qualities and characteristics are due mainly to the natural environment; and the manufacture of the product follows strict guidelines.

France has a similar system which assures you that a bottle of wine designated "Chateau Yquem" is really from the village of Yquem; or that Roquefort cheese comes from that area and the cheese is formed in the traditional way; or that Champagne is really made in the region of France that originated this kind of wine.

There are many excellent olive oils that are not designated "D. O". This is because they draw their olives from diverse areas, rather than being grown in one region.